Camping in the hills of southern Spain

This summer we had the opportunity to attend the Spanish Baptist Children’s camp in southern Spain. It was a great experience; sleeping in tents or cabins with bunk beds, worshipping together outdoors, swimming, seeing wild hogs and other animals in the hills. It was a great opportunity to be at a church camp where half of the children came from un-churched homes. One evening our pastor asked me to talk with the group about how I first became “friends with Christ” as a child at a church camp in the states. Please pray for the children who come from un-churched homes; that they will continue to have opportunities to hear the gospel. 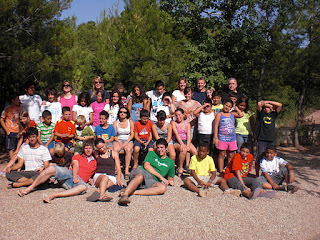 This summer we have had lots of new babies arriving in Roquetas. Ndeye’s daughter, Fatu, traveled from Tenerife, to bring her new baby daughter to see her grandmother. The baby’s name is Ndeye! Beatrice had a beautiful baby boy named Michele. Maimouna had twin babies and named them Adam and Awa. Rougi now has a new baby girl named Maimouna. Umi’s baby should be arriving soon. We have had a great time delivering beds, strollers, food, milk, diapers, and baby clothes. We have been able to attend two baby naming ceremonies, where the daddy whispers the baby’s name into his/her ear on the 8th day after their birth and then they shave the baby’s head. Then for the rest of the day the women cook African food, which we all enjoy eating together. The most fun has been holding these precious little ones! Please pray for baby Ndeye; that her hips will grow correctly, so that she will not have to continue wearing a brace and that she will be able to walk correctly in the years to come. 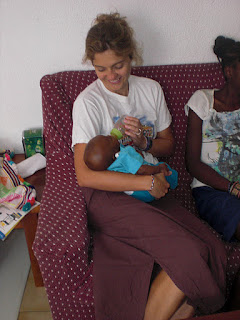 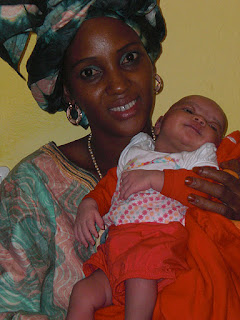 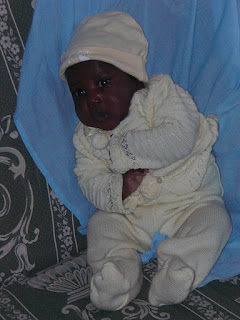 A Little Bit of Heaven

One of our greatest joys in our work over the years has been having the opportunity to experience a little bit of what we believe heaven will be like in worshipping with people from different cultures in different languages. In San Francisco, we worshipped with the Church of the Nations Christmas service in which the Bible was read in 10 different languages. In Marseille, France we attended a choir concert where choirs worshipped together from Romania, Madagascar, Philippines, and Isreal. In Roquetas we attend the immigrant prayer meetings where folks from Africa, Spain, Romania, North and South America worship and pray together. During our August and September kids club, we sang “God is so Good” in English, Spanish, French, Romanian, Mandinka, Wolof, and Sereer! The kids also enjoyed eating cinnamon toast for the first time.

Daniel 7:14a: “He was given authority, glory and sovereign power; all peoples, nations and men of every language worshiped him.”

Please pray for us as we work with people from many different countries and languages that they might see Jesus in us. 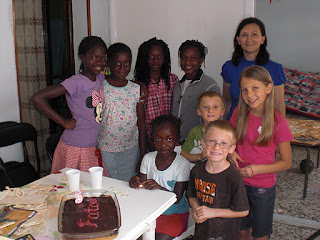 In August we gave backpacks to the children of families from our ladies class that meets every Friday. We filled the backpacks with pens, pencils, erasers, notebooks, folders, crayons, glue, sharpeners, markers, colored pencils, and a few other school supplies. After we gave out the back packs we had a birthday party for Sidou. We had a cake and sang happy birthday and then gave her a gift with clothes and a small toy. Sidou is ten years old. When she opened her gift her face was glowing with the smile and she gave us a big hug and said thank you many times. On the way home I was talking to Megan and saying that I thought the best part of the day was Sidou’s face when she opened her present. Megan said, “Mommy she had to ask me how to open it.” Sidou had never received a wrapped gift before, yet she is a happy child because she is well fed and has clothes to wear each day to attend school. We learn many things about contentment from our precious African friends. Please pray for the children in our community, that they would take advantage of the many opportunities that they are given and not be drawn in by negative peer pressure. 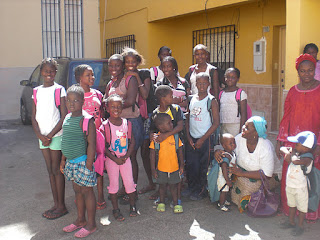 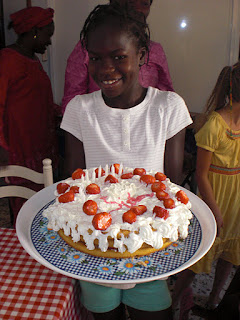 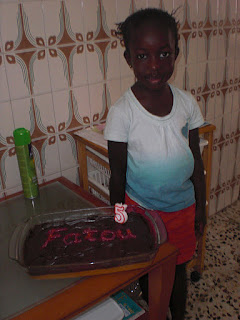 Association of Sereer in Spain

Years ago I served in Senegal with the Sereer people group. I lived in a small village called Fissel and learned the language and customs of this people group. I grew to love the people. I was sad to leave Senegal and hoped that someday soon I would be able to work with the Sereer people again. Several years later when we arrived in southern Spain to work with African immigrants, I was so excited and a bit surprised to meet Sereer people living in Roquetas. Now, once again, I am greeting folks in the Sereer language and enjoying their customs of baby naming ceremonies, African wrestling, and lots of fellowship together while eating poulet yassa, thieb o gin, mafe, and drinking attaya. Recently, Joel and I were able to join the Sereer Association here in southern Spain. After we officially joined this group of Sereer people, one of their officials said to us, “You are now a part of the Sereer family for always.”

Please pray for our Sereer family. 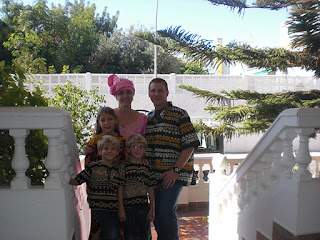 To read an inspirational story about the recent earthquake in Lorca, Spain, please click on “Thoughts Along the Way.”

Thank you for your continued support through prayer and giving.