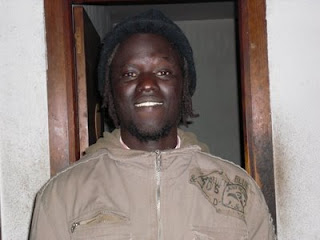 Through your prayers and support you are reaching out to people from , , , , Guinea Bissau, Equatorial Guinea, , the , , , and . Deuteronomy 10:18 and 19 “He gives justice to orphans and widows. He shows love to the foreigners living among you and gives them food and clothing. You, too, must show love to foreigners, for you yourselves were once foreigners in the .” Thank you. 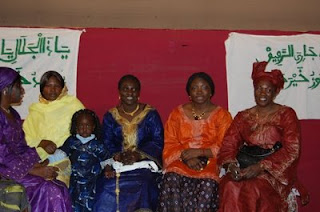 This past month we have been involved in a couple of different activities that have allowed us to meet new people. We attended a Senegalese Muslim conference and meet several new families that we now visit and deliver vegetables to their homes. One family is a Sereer family with four children. We enjoy watching Megan and their small girls greet each other in Sereer.

We have also started volunteering with the Red Cross immigrant center in , where we have the opportunity to give out food, clothes, and other services. We have met people from , , , , , and other countries as well. Last week, as I served food, I prayed silently that God would fill their hungry souls as well.

We also had the opportunity to visit an African church called Christ Movement Ministries. The church members are mostly from and . During the service they prayed for our family and our ministry to African immigrants. We enjoyed the Sunday school; Joel specifically enjoyed the African rendition of “The Boy Who Cried Wolf,” told as “The Boy Who Cried Lion!” The sermon was inspiring as the pastor spoke about how many of them from had experienced rejection from family and friends because of their belief in Christ. We have posted quotes from the sermon and a worship song on “Thoughts Along the Way.” (You can click on the link at the top of this blog page to read the devotional based on the sermon by Pastor Nathaneil Ikeh from . – good stuff. Also there are two other new devotional entries.) 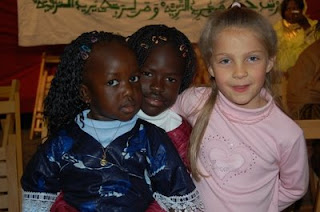 About a year ago, when we first visited 200 Viviendas, we were hanging out at the plaza and I met a young girl named Ami. She was one of the first people that I met that spoke Sereer. I was so excited to learn that there were Sereer people living in . She was a bit shy so I did not learn where she lived and was afraid that I would not get to see her again. Then recently, when we visited the new home of a family that we had met at the Senegalese conference, we were greeting the younger children in Sereer, and in walked Ami. She is their oldest daughter. Again I was reminded of the joy in “hiding and watching” God at work. Now we will be able to visit this family regularly. 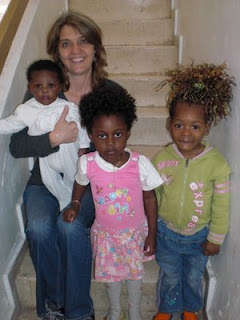 One Friday we visited several new families and delivered pictures and vegetables. At the end of this day I realized that we had greeted or spoken to people in English, French, Spanish, Sereer, Wolof, and Mandinka. Please pray for us as we continue in our language learning that we would be able to keep our languages separate, and remember which is the most effective language with each person, and as we try to communicate in the best way possible in order to one day share with each of them about a personal relationship with Christ. 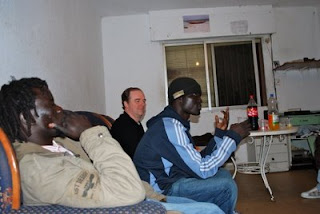 Recently while we were visiting the house in Mojonera, Nguy told us his story. He is the oldest male of his father’s family. His father passed away and left behind three wives and more than 14 children. As the oldest male, Nguy is now responsible for his father’s entire family as well as his own wife. He said that he began to feel the pressure that is felt by many African young men to make the journey to to try to find work and send money home to their families. He told of how many villages put pressure on the young African men and boys to travel to to fulfill their dreams. He spoke of how they would see on television the lives of people in Europe; people who had homes, cars, and plenty to eat; people who seemed to have no problems, and they believed that this was what life in was like. When Nguy’s wife became pregnant, there was even more reason to make the dangerous journey to try to support his family. His family is from , , and even though he has a higher education there was no work to be had in for a long time. Thus he made the decision to go to . He left on a colorful canoe-like boat filled with 98 other young men hoping to make the journey. The motor died out in the ocean. They ran out of food and water and the young men began to perish. Before it was over 25 men had died. Nguy said he lost friends and loved ones. They eventually made some sort of sail and the wind carried them to . Nguy knew that he must try again if he wanted to feed the families that he was now responsible for. He got on another boat that traveled for 7 days at sea. He eventually was picked up by Spanish police and taken to a detention center where he was held for some time before being released and flown to with the instructions that he could remain in and wait for about three years before he could receive his legal papers. Soon he traveled to Mojonera to the house where he lives with many other Senegalese guys who are basically on the same journey. He is sad to have found that the dream he saw on the television and that the members of his village hold is not the reality in . He lives in a small rundown 4 bedroom house with as many as 20 other guys. He gets up every morning at 4 a.m. to try to find work. On the days that he is chosen, he gladly works 8 hours in the large, hot greenhouses. He pays the rent, buys very basic food supplies; rice, pasta, onions, sometimes chicken or fish, and sends the rest of the money back home to , where his wife and year old baby boy, that he has never held, live. His dream is different now; he hopes to wait and work in for two more years until he gets his legal papers and he can travel to to see his beautiful family.