We are in the last week of the 40 days of prayer for France, so we (the Whitley family) climbed the 330 steps to the top of the Cathedral here in Strasbourg, to pray for France and Strasbourg as we looked out over the city. 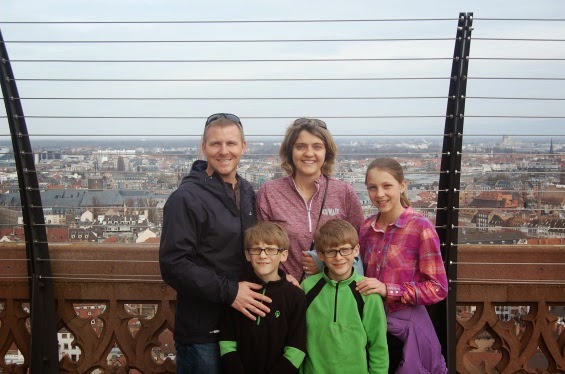 STRASBOURG,
a “crossroads” city both by its name and its location, Alsatian and European capital, is also called the capital of Human Rights and the capital of Christmas.


Strasbourg’s “Grande Ile” (Big Island – the city center) was recognized as a UNESCO World Heritage Site. A city of 275,000 inhabitants (765,000 with its suburbs), this economic center of Eastern France welcomes 45,000 university students, including the elite National School of Administration.


Jews have experienced many persecutions in history here, including 2,000 of them burned alive in the public square on February 14, 1349. ..Currently there is a significant Jewish community in Strasbourg and relationships with the Christian community thrive at various levels.


As have all Alsatians, residents of Strasbourg have changed their nationality 5 times – being alternatively French and German. …


The Reformation from its beginnings with Luther has impacted the city and the region. Gutenberg printed the first Bible in Strasbourg. Calvin took refuge there. The Union of Protestant Churches of Alsace and Lorraine (UEPAL), founded in 2006, is the result of the Lutheran and Reformed Churches of Alsace-Lorraine uniting under a single organization.


The charismatic movement is also well-developed there, with Catholic prayer groups, a Protestant community and an ecumenical group. Inter-church gatherings happen at different levels. The churches of the city are recognized by the authorities for their social involvement.


The presence of other spiritual or occult currents are a concern to Christians: The Regional Islamic Worship Council had no difficulty being established there, with its new Grand Mosque well-funded by local authorities.  In 2011, the city opened a new Masonic Temple. In January 2014, a Voodoo Museum opened.


Intercession has its place at different levels: local intercessors have been active for many years, including inside the European institutions. …

Evangelicals:
Their presence was evident from the beginning of the Reformation. Today, the Association of Free Evangelical Churches of the Urban Community of Strasbourg, created in 1992, includes 14 churches and fifteen other ministries including the Protestant Evangelical Committee for Human Dignity and Brother Andrew’s Open Doors ministry. Becoming the local branch of the National Committee of French Evangelicals (CNEF) in 2011, the association hopes to develop a greater presence with local authorities.


• Let us [thank] God for the Christian heritage and potential of this region, and the dynamism of Alsatians.


• Let us intercede so that it is not the religious spirit (along with all the false religions), but the glory of God and the unity of the Holy Spirit which are revealed.


• Let us pray that Strasbourg not only be known for its "Christ child market" – the original name of the Christmas market – rather that people of all backgrounds would encounter the risen Christ!


•  [Please pray for] the governmental authorities in this city: local, regional and European.


• [Pray for] Strasbourg to stand as a city of light for Europe: that the wisdom of God would be enthroned there –higher than all institutions and strong in influence- that His Kingdom would come to a Europe reconciled with its Christian roots.” (source: prayforfrance.org)


Please pray that “God’s kingdom will come” to Strasbourg: that His will “will be done [in Strasbourg] as it is in heaven.”  Matthew 6:10


Thank you for joining us in the 40 days of prayer for France.
Posted by Joel & Tiffne Whitley at 3:20 AM

I work at FBC Hereford TX. Kyle Streun pointed me in your direction. We are looking for opportunities to do international missions next summer with our church and I wanted to reach out to you guys and see if we might could partner with you? I'm not sure how to contact you guys so I thought I'd start here. If you can send me an email to kaylamurray@live.com and let me know how to best communicate with you guys that'd be great!

Thanks and hope to talk to you soon!
Kayla