Thank you for your prayers for us
and for France

This past Sunday, just two days after the tragedy in Nice, the worship leaders at the French church we were attending read a statement from the Fédération Evangélique de France.  The statement was to express the deepest sympathies for the loss of loved ones and a time of prayer for the protection of France.  Afterward, we spent time joined in prayer for France and those affected by the attack.

Thank you for your prayers for France during this time.  Please pray for relations between immigrants and French nationals, that these events will not put more of a strain on these relationships.  Please pray for the victims in Nice, especially the Copeland family from Texas who are known by a friend of one of our ministry partners. 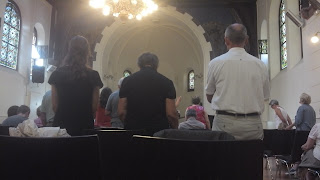 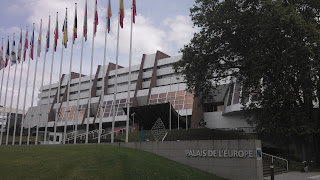 Out front, the flags of all the European Nations, line the front lawn of the Council of Europe representing the solidarity of the European community while women from multiple countries gather inside to pray for each other, European leaders, and relevant issues throughout Europe.  Tiffne was invited to join this group for prayer and Bible studies.  On one occasion, as Tiffne lead the Bible study, ladies from Pakistan and Egypt shared about the suffering Christians undergo in these countries.  Please pray for the European Institutions in Strasbourg, their leaders, and for Joel and Tiffne as they seek to encourage these leaders within these European networks.

Action Quartier
The weather forecast for Saturday, June 18th was rain.  That morning, looking out the window at the rain coming down, it seemed the forecast was going to hold true.  In spite of the rain, Tiffne and the children loaded up in the car to go join a team from Eglise Baptiste de Strasbourg (EBS) for the monthly children’s outreach program in a local immigrant neighborhood park.  After walking to the park in the rain, Tiffne told one of the workers that, “she was really impressed with the team’s dedication to this ministry and the children in the neighborhood.”  The worker responded, “sometimes God does this really cool thing.  It rains as we get ready to go, but when we are there at the park with the children, the rain seems to stop and doesn’t start again until we finish.” 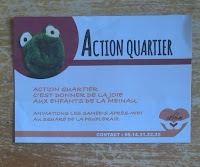 The rain did not seem to dampen the spirits of the workers who were already talking through the activities they had planned.  Then a miracle, as soon as the team was set up and ready to welcome the children, the rain stopped.  For over two hours, the team played games, did crafts, had a snack, and shared a short Bible story with the children; then almost on cue as the last of the activities was concluded, the rain began again!  The walk back the church was through a heavy downpour, but the spirits of those serving in the ministry were overflowing with joy.  Those who served that day knew that when they were obedient to God’s leadership, He always makes a way for His love to be shared and still does miracles!

Being a teenager is hard.  Being a Christian teenager in a school where you may be the only one can be even harder.  Often times we have heard the teenagers here in Strasbourg say, “It is hard to be the only Christian in my class.  I don’t have anyone to hang out with or talk to about what is going on.”

In response to hearing the need, Tiffne and Anne responded by developing the idea to create a community youth group.  The idea behind this group was to unite the youth groups from various evangelical churches in Strasbourg so that the youth could get to meet other teenagers and enjoy a time of Bible study and fellowship.  The youth group UNIQUE became a reality on Saturday, June 4th, after many planning meetings and much time spent in prayer.  During the first meeting, Tiffne taught a Biblical lesson on being one in Christ.  After the time of Bible study, Anne lead the group in a craft project that revolved around the statement “We are…”  The youth were able to reflect on the fact, that though we are all unique individuals who come from uniquely different churches, we are all one in Christ.  This idea of building community for the teenagers within the evangelical community of Strasbourg is just beginning.  Please join us in prayer for this ministry as teenagers in Strasbourg join together as one UNIQUE group. 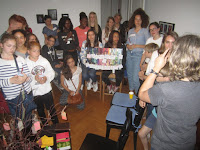